You are here: Home / Anti-Aging On The Inside / An Apple a Day Keeps Aging at Bay 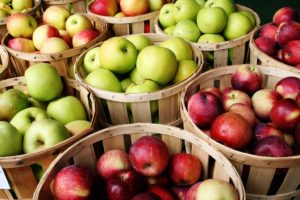 A couple of weeks ago in an anti-aging hacks article I mentioned how apples, apple juice, apple peel and apple pectin can suppress and even prevent some cancers.

I also said that I had just touched the surface on the research and that apples deserved their own article. I was that impressed.

So here I am back on the apple kick. I feel the research is so important that I needed to share it with you.

And it’s only in the last several years that apples been so heavily studied. There are 7500 types of apples around the world, 2500 varieties just in the United States [1].

Apples consist of antioxidants, minerals, vitamins, fiber and polyphenols. They do not contain fat, sodium or cholesterol.

Even researchers at Florida State University said that apples are a “miracle fruit”. You see, animal studies research shows that the pectin and polyphenols in apples reduce inflammation and lower lipid metabolism. Researchers concluded that this could extend a lifespan [2].

The same researchers, of the animal study, went on to evaluate the long-term cardioprotective effects of daily consumption of apples in postmenopausal women.

The study used 160 women from the ages of 45-65. Two groups were formed. One received dried apples daily (75g/day for one year) and the other group ate dried prunes every day for a year. Researchers were stunned to see changes in the apple-eating group at six months – an incredible 23% decrease in LDL cholesterol (bad cholesterol). And the same results that were observed with the animals were seen with this group too – a lowering of lipid hydroperoxide levels and C-reactive protein. On top of all that the apple group lost an average of 3.3lbs [3,4].

Possibly the effects that apples have on cancer suppression and prevention stem from their antioxidants, which have anti-inflammatory properties.
Most of the antioxidants in an apple are contained in the skin. But the more impressive studies are about the pectin.

And the Studies Go On and On

Because I could tell you about so many studies I thought I would stop at the ones above (I’m sure you have other things to do today). I’ll just cut to the chase with all the other apple benefits. Short and sweet.

I will however list all the references down below so if you want to find out more it’ll be there for you.

Anemia – Apples contain a rich source of iron and have been used to improve red-blood cells and help those with anemia [21].

Arthritis – The flavonoids in apples help to reduce inflammation and many people are finding relief with eating apples [22].

Asthma – Drinking fresh apple juice can give relief. Drinking once a day has been shown to reduce wheezing and breathing problems associated with asthma [23].

Diabetes – Apples help control blood sugar by reducing the amount of carbohydrates in the body [24].

Digestion – An apple a day helps your stomach digest food and absorb the nutrients you need, especially if you eat an apple before your big meal [25].

Heart Disease – In the UK researchers found that prescribing an apple a day would prevent or delay thousands of vascular deaths a year. And, as established above, it reduces cholesterol levels [26, 27].

Stroke – Researchers show that a decrease risk of stroke is directly related to a regular intake of apples [28].

Weight Loss – Because apples have so much fiber they can reduce the appetite. Apples also speed up metabolism [29,30].

And here are some scientifically-studied ailments that an apple a day prevent:

Scientists and doctors alike agree that everyone could benefit from eating apples three to four times a week.

There are a couple of caveats with apples that you should know:

1. Try not to bite the seeds because they contain cyanide. In small doses they won’t harm you.  Biting them is going to release the cyanide but swallowing them whole will most likely not have any effect.

2. It’s important to buy organic apples because pesticides do soak through the apple’s skin.

P.S.  If you missed the hacks where I mentioned the apples you can catch up here.  I’ve also written about polyphenols here.

25Hyson D.  A Comprehensive Review of Apples and Apple Components and Their Relationship to Human Health.  Adv Nutr.  2011.

32Rui Hai Liu.  Health benefits of fruit and vegetables are from additive and synergistic combinations of phytochemicals.  American Society for Clinical Nutrition.  2003.