You are here: Home / Anti-Aging On The Inside / Mother of All Antioxidants 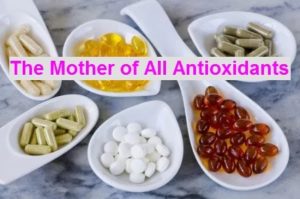 A few weeks ago in your weekly anti-aging hacks I mentioned glutathione:

“After reading a study by the Clinical, Cosmetic and Investigational Dermatology in New Zealand I’m headed to my local vitamin store for some glutathione. You see, the study showed that after 12 weeks of 250mgs a day subjects had significantly reduced wrinkles and increased skin elasticity.”

Because of where I work I’m well aware of glutathione’s energy- and immune-boosting abilities. You see, I’m lucky to have access to glutathione IV.  And anytime I’m not feeling well due to a cold or the flu, the clinic prepares a special IV bag that contains mostly glutathione with some Vitamin C and Vitamin B12.

After this special concoction I usually feel better and my illness is shortened.

Beyond that I really didn’t give glutathione another thought until the other day when I found that study about improving aging skin.

Now I had to know more.  And I was about to discover a lot.

So what is glutathione anyway?

Glutathione is a molecule made up of three amino acid building blocks and is an antioxidant.  Glutathione is found in every cell, organ and tissue in the body and has been referred to as the “Mother of all antioxidants”.

How do you know if you are deficient in glutathione?

If you are a smoker, have any illness (even a cold), do not eat organic foods or are over the age of 45, you are deficient.

In fact, The Lancet, a leading British medical journal, found that the highest levels of glutathione were found in healthy young people. Healthy elders and sick people had very low levels.  It’s been shown time and time again in many studies that anyone with anything from cancer, to  Alzheimer’s and everything in between has low levels.

How do you take glutathione?

There’s conflicting evidence on taking a supplement or taking supplements that support the production of glutathione.

If you want to take supplements that boost the production of glutathione, then add milk thistle, CoQ10, alpha lipoic acid (ALA), a multivitamin, fish oil, N-acetyl-cysteine (NAC), curcumin, Vitamin C, Vitamin E, Vitamin B12, Vitamin B6 and folate to your daily regimen.  This may sound like a lot of vitamins but they all have so many health benefits.  It’s a good regimen if you don’t have one. I take many of these myself.

And, last but not least, if you want to take glutathione directly the best form is through injection.  But, there is evidence that the liposomal form of glutathione (which can be found at your local vitamin store) does pass the blood-brain barrier and is more bioavailable than the pill form.  Suggested dosing is 250mgs.

I’m pretty sure we could all use some glutathione … it’s good anti-aging.

Exercise and checking your levels will also help!