You are here: Home / Anti-Aging On The Inside / Health Benefits of Pumpkin Seed Oil 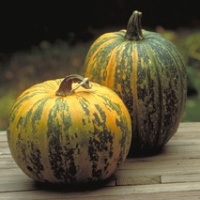 After Monday’s weekly anti-aging hacks, I received emails from many of you.

All were inquiring about pumpkin seed oil.

And there is so much to say about this little seed that I thought I would use today’s article to expand on the hack.

Like I did, you might be thinking that this oil comes from the fall fruit that has been hollowed out for Halloween and used to make delicious soups, breads, desserts, pastas and more. But the nutritious oil does not come from this type of pumpkin.

The pumpkin seed oil that has medicinal uses is from the Styrian pumpkin. This pumpkin gets its name from the state of Styria, located in southeast Austria.  It is yellow to orange with mottled green stripes.

In fact, those little green seeds you see at the grocery store, often called pepitas, are the ones with all the health benefits.  Those are from Styrian pumpkins and they differ from the jack-o’-lantern seeds because they don’t have a shell.  They are sometimes referred to as shell-less, naked or hulless seeds.

To me they have a nutty flavor and make a great snack.  I sometimes will throw them in a salad.

Styrian pumpkin seeds contain magnesium, manganese, iodine, zinc, plant-based omega-3’s, lutein-zeaxanthin, potassium, copper, iron, selenium, Vitamins A, B1, B2, B3, B6, B9, B12, C, D, E, K and are high in protein.

Because the seeds are so high in carotenoids, antioxidants, essential fatty-acids and phytonutrients,  there have been many studies conducted on the oil of the seeds.  Styrian pumpkin seed oil has been shown to:

The oil is also remarkable on the skin and has wound-healing properties.  It’s even being considered for wound-healing treatments in pharmacology.  And in one study, where the pumpkin seed oil was used on second-degree burns, the results showed the wound treated with the oil had the best tissue regeneration.

Among all of the benefits, the one that I have used it for is my hair.  And even though the studies have only been done on men, it worked for me.

You see, my testosterone was high which made my hair fall out.  Getting my testosterone back to normal was only half of the problem.  I needed to regrow my hair.  Some hair-growth formulas don’t work on this type of hair loss. But pumpkin seed oil returned my locks, and in a pretty short period of time too.  I can testify that it doesn’t just work for men’s hair loss.  I ingested the oil once a day, but since then I have read that you can also apply it to your scalp.

And, last but not least, to answer the biggest question that started this entire article: how to use the oil for a sunscreen? Mix 1 part pumpkin seed oil to 10 parts coconut oil (which also acts a sunscreen).  You can also melt with zinc oxide to make it more liquid. Again, start with a 1:10 ratio but play with it to get the consistency you want.

To get all the health benefits of the seeds you can eat them, take a supplement or ingest the oil daily.

You can cook with the oil but the heat will reduce the nutritional value.

I recommend ingesting the oil because, even though the seeds are a great snack, you have to eat a cup a day to get all the benefits.  For me, that’s too many calories.  If you can afford the calories munch away.

My favorite pumpkin seed oil is made by my friend Ian Clark at Activation. It’s called Panaseeda Styrian Pumpkin Oil.  And Ian guarantees his products. If for any reason you are not satisfied you can get a refund.   Click here to order yours today.

Every time I write to you I learn.  I can’t wait to start using my pumpkin seed oil on my skin.

P.S. If you missed Monday’s hacks you can catch up here .